Continuing with our series of posts that are introducing the individuals that make up the team at McKevitt King Architects I would like to introduce myself. I'm Jim.... Jim MacArdle!

After I finished college in Bolton Street, I worked with a building contracting firm based in Churchtown, Dublin, and then with Campbell Conroy Hickey Architects in Hatch Street and Camden Street – in the old Earley’s Studios. They were good places to work, but the main thing I didn’t like about Dublin was the noise of the traffic and the fact that it wasn’t Drogheda.

So Liz and I decided to move out of Dublin and down to my parents' summer house in Bettystown to spend the good weather on the dole playing music. At this time, my brother Tom was working with Turlough, but had got a new job in the OPW. I was enjoying my £67 a week dole money and frequented my second home in Carberrys of the North Strand at least 3 nights a week and Sunday mornings - playing music and learning important things in life that can only be absorbed through endless discussion with a few jugs on board late at night on a licensed premises.

Anyway, I had no intention of working, but Tom asked me a few times ‘Have you rung Turlough yet? ’, Eventually I did phone him and, after collecting my dole one Friday I called up to see the man himself and quite unexpectedly started work on the North Road the following Monday – and I’m still here – many years later (in my cocoon, of course).

The office at that time was smaller than it is now, Turlough’s office and the main office with three large drawing boards. Turlough at that time lived in the house and young James (I think he was 3 at the time) used to run happily up and down the garden path with his toy duck.

The welcome change I found in moving to work in Drogheda was the more leisurely pace of life and work in the town, and the fact that I was among my own people. The office at that time was computerless – a typewriter, an office phone, a few drawing boards and a printer which used ammonia to ‘fix’ the prints. We weren’t waiting for new technology to come along, we were just trying to avoid poisoning ourselves. But the most positive change to me at the time coming into a new job, was that as soon as quitting time came, we went home to live our other lives and this reflected Turlough’s approach to life generally.

The work was always very interesting and it was a time when the large building and contracting firms in Drogheda were still in business – Healys (in the old jail in Scarlet Street), O'Donnell & Byrne and Pat Leech in George's Square, Murphy Bros (Derry and Paddy) down the Old Abbey, the late lamented Gerry Watson in Dyer Street, Denis Doherty down the Mall and others too numerous to mention. As time went on we did considerable amount of work with Kerrs, Clarkes & Taaffe Bros of Ardee and Dundalk-based contractors Danny Culligan and Frank Toner.

At the time I joined the office, Healy’s, with John Kavanagh as foreman were building a new branch building for the AIB in Skerries and today the office still retains its relationship with the AIB and over the years we have worked in Donegal, Sligo, Cavan, Monaghan, Meath & Kildare. At present I’m working on a small project at the Dundalk branch (the subject of a recent unexpected withdrawal).

I was always interested in managing the construction process on site – turning our drawings and designs into reality on site. One of my favourite projects in my time the office was the reconstruction of the tower at Millmount which we worked on from 1998 as one of Drogheda Corporation’s Millennium Projects. At the time it was in a poor state of repair, indeed it had been in poor shape since the Free State troops shelled it in 1922. 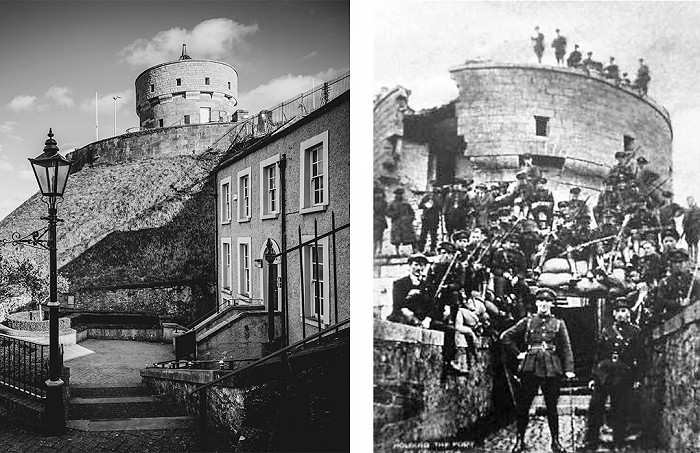 When we started researching the construction of the original tower prior to rebuilding, there were few documents available showing its original form of construction. The iconic photo of the tower in July 1922 with the victorious Free State troops in front gave us valuable information, as damage done by the shells fired from beside the Dominican Church revealed a ‘section’ through the building we would not have had otherwise. The photo taken after the shelling was sold as a postcard in Schwers Newsagents at the corner of West Street and Peter Street the following day (no word of a lie).

The work was carried out by Brendan Duffy Construction from Dundalk and the building has two  viewing platforms with unequalled views out to the mouth of the Boyne and westwards towards Oldbridge. 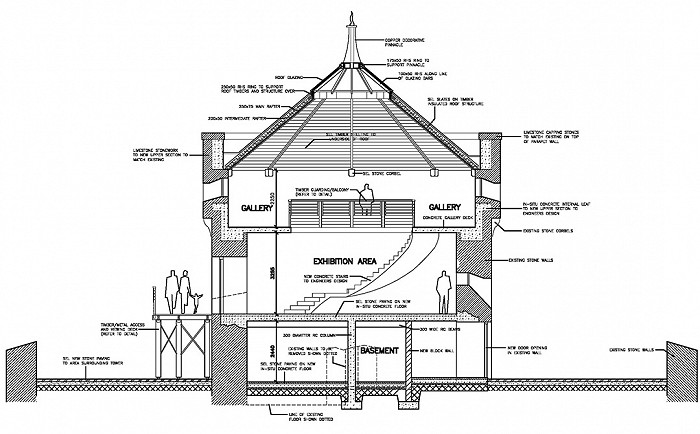 The working drawings were prepared by Aidan Kerr. I asked Brendan Duffy’s men to take off their hard hats and high-viz jackets as they posed for the photo. Like all responsible tradesmen, they put them back on immediately and continued with their work. In the photo you can see the slates being cut to shape and the box steel rafters in place. The roof was constructed by fitting timber rafters between the steel, laying 2 layers of thin plywood breaking the joints and the slating courses diminished in size as the radius reduced. All in a day’s work. 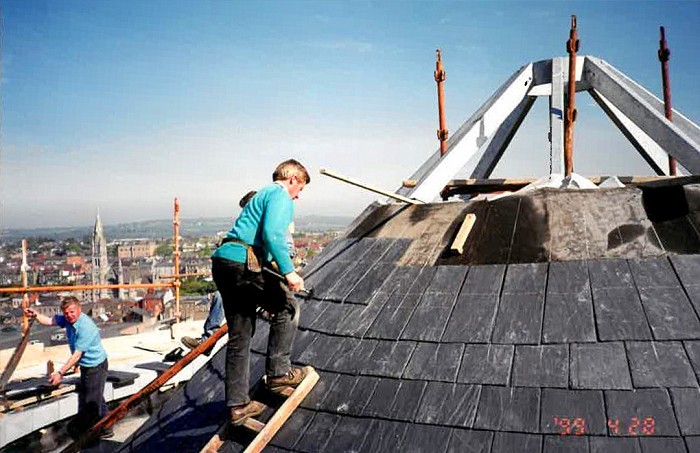 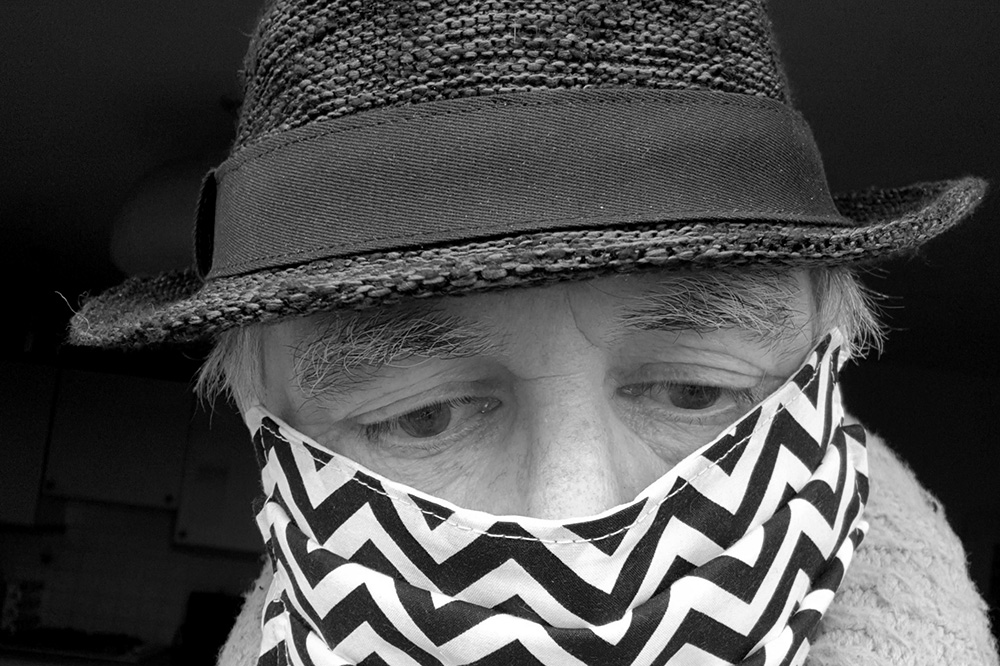 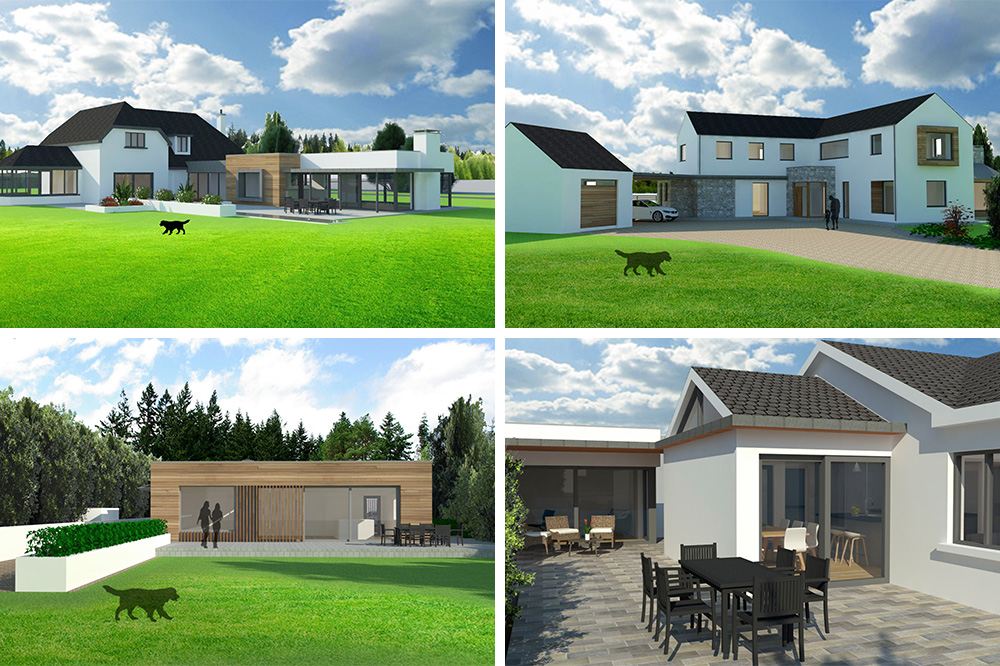 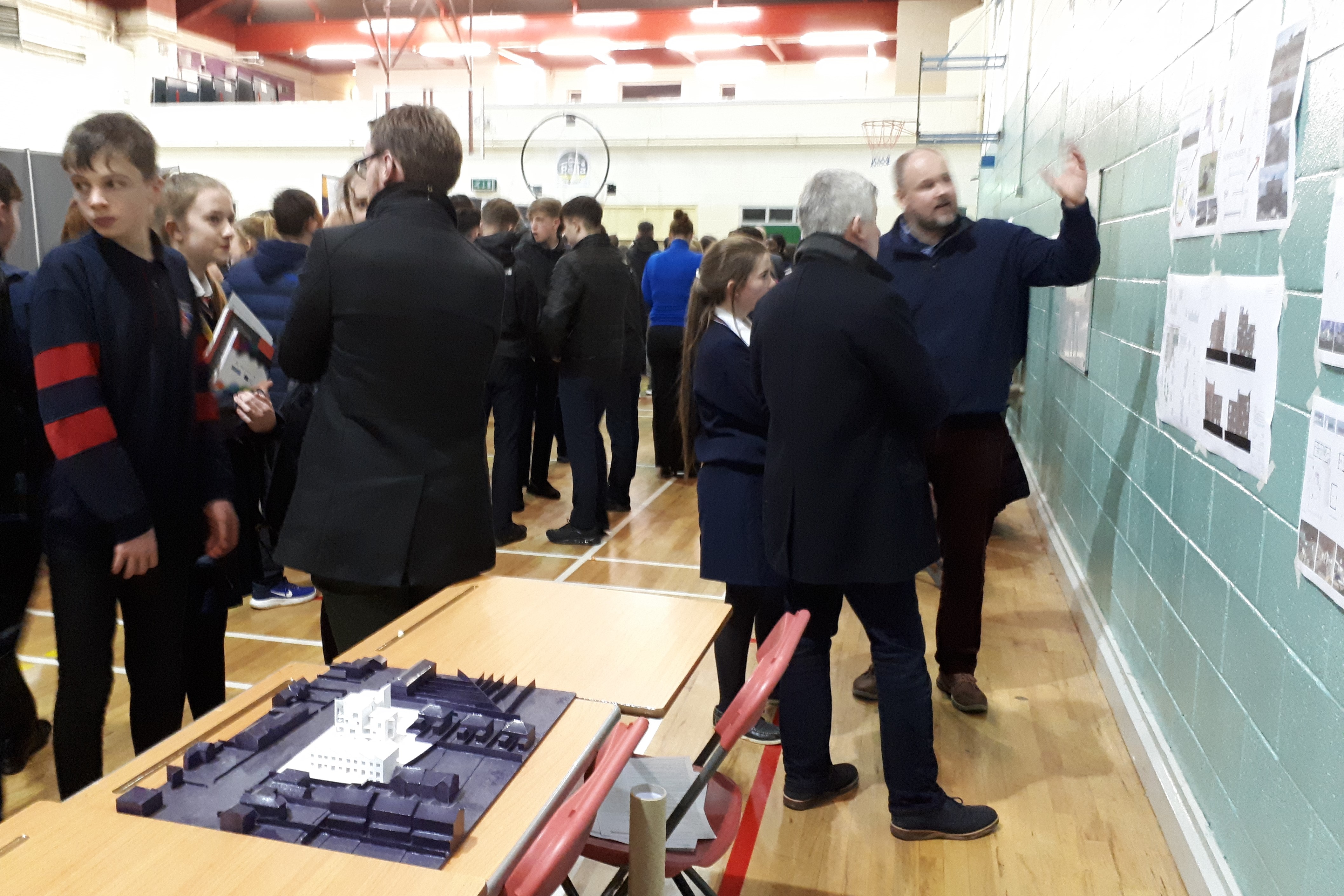